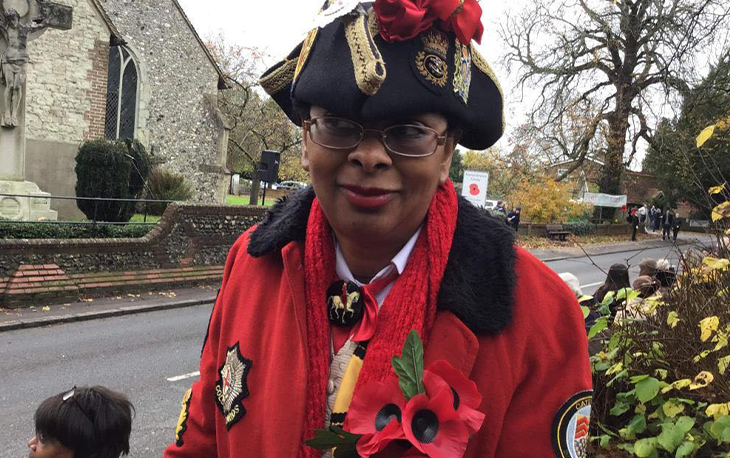 Sonia Hunt never allowed her learning disabilities to stand in the way of fulfilling her dream and joining the funeral industry at Pinks Funeral Directors.

Being Caterham’s official town crier since 2003, she has always relished getting involved with the local community and bringing female representation to a traditionally male role.

She said: “I attended the Bletchingley Skills Centre in Surrey ran by an amazing woman called Wendy Cope, who recently passed away. She gave me the confidence and skills to pursue my passion for history and become town crier, a role dating back to the 18th century.”

Amid such duties as opening Caterham Festival, fundraising for charities and looking after the mayor, Sonia found herself supporting a local funeral directors as it celebrated its 150-year anniversary.

She described: “They asked me to put on the uniform of a funeral director and I was instantly drawn to it.

“The funeral industry has a rich history and I’ve always enjoyed watching documentaries about it.”

By this point Sonia had become well acquainted with Area Development Manager Karen Rattigan, who was then Funeral Arranger at Pinks, as she regularly popped in to tell her about the latest news in her capacity as town crier.

Karen noticed Sonia’s natural people skills and upon learning about her fascination with the funeral industry, she suggested she could take on some work experience at Pinks.

She said: “Pinks has been incredibly supportive of my learning disabilities by teaching me how to answer the phone, providing yellow paper to assist my reading and helping me improve my handwriting.”

Sonia enjoys her role which involves taking care of the deceased, working with Director of Central Operations Richard Van Nes to send stock to new branches, and being the Community Champion for the South West London area.

She concluded: “With the support of Karen and Pinks I feel nothing is an obstacle. One day I’d like to prove that by becoming a funeral director.”

Jamie added: “Sonia is a shining example of what it takes to work in the funeral industry. She has a bubbling personality that never fails to make us and the families we serve feel uplifted.”

Have you found what you are looking for today?